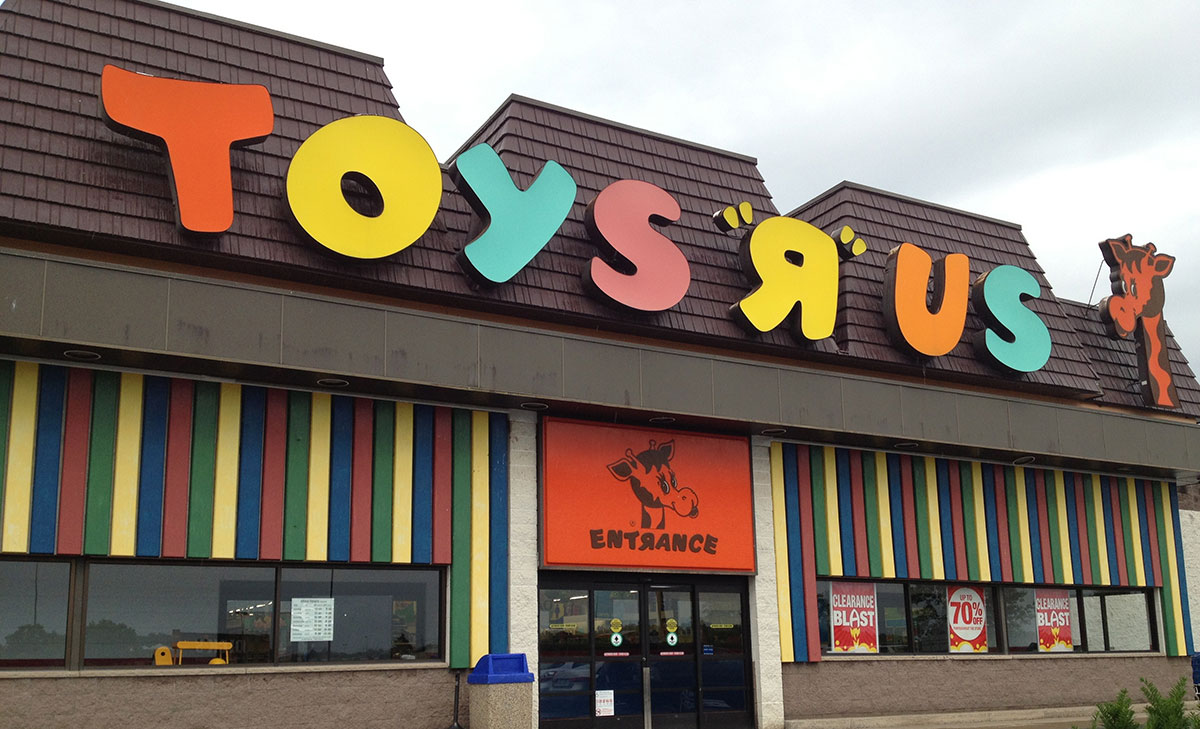 Saying Goodbye to a Childhood Sanctuary…

Growing up in the ’80s, Toys ‘R Us was one of those iconic vestiges that really defined what made it fun to be a kid!

The closest Toys ‘R Us to my hometown growing up was a couple of hours away, so visits were reserved for special occasions – namely back to school and Christmas shopping – and despite how much I loathed picking out clothes or gifts for other people, there was always that lingering promise that if I was really good, at the end of the day we’d go to Toys ‘R Us and I could pick out a video game or another toy…

Nearly every Nintendo game I got during my youth came from that coveted game room at Toys ‘R Us – because the games were so valuable that they had to be kept under lock and key!

Scanning that seemingly endless wall of Nintendo boxes to decide the next game that you’d be playing for months on end was a rite of passage for kids my age, but my kids will have a different experience as we watch The Greatest Toy Store There Is! prepare to close its doors for good after failing to recover from its bankruptcy filing last fall.

Today we can have just about anything shipped directly to our doorsteps in only a few days, and at prices that make it hard for retailers who have stores and lights and more employees to compete.

In 1985, Walmart hadn’t yet surged into its retail dominance, so aside from the random toy shelf at the grocery store and maybe a couple of aisles at the likes of K-Mart and Sears, Toys ‘R Us was the place to go for all of your toy needs.

Granted, it seems like almost every store these days has a small selection of toys, from drug stores to Best Buy to your superstores like Walmart and Target, but they’ll never match the vast, overwhelming selection that a dedicated toy store like Toys ‘R Us offered … one that could make a kid feel like they’re walking into Willy Wonka’s Chocolate Factory!

Few stores have existed that were dedicated solely to things that kids love. That’s going to be a hard thing to replace when Toys ‘R Us is gone…

Don’t get me wrong – I love Amazon Prime just as much as the next guy.

Our household gets deliveries from Amazon just about every week – everything from diapers to cooking supplies to books and toys and video games, and it’s awesome that I can order something on a whim from my phone whenever I think of it, day or night, and two days later it will just show up on my door … like magic! I don’t have to find the time in my day to make a trip to the store or deal with kid tantrums when we get there, and with the low prices in ways it almost sometimes feels irresponsible shopping retail instead.

And yet every time we pull out our cell phones to check prices in a retail store, we take a step closer to their demise.

Every time we pass something that we need and think, “Nah – I can get that a few bucks cheaper on Amazon…” we take another step towards not having that retail option available as a choice when we actually do want to do our shopping in person.

Those things that we like to see in person prior to buying them – it’s easy to forget that the only way we’re able to see them in person is if enough people buy their things at the retail store in order to keep the lights on.

I’ll admit that I’ve done it with cameras and TVs before – checked out the latest models at Best Buy and then ordered them on Amazon instead because they were 10-15% less than Best Buy. I also tend to not buy my more expensive Lego sets from Toys ‘R Us because they’re a little more expensive than other outlets.

Now of course, the death of a giant like Toys ‘R Us is more complicated than any one issue – on top of consumers choosing online over retail, they’ve also faced newer generations trending more towards digital entertainment, to the point where so many video games are downloaded online without ever requiring a trip to the store like I did to buy my cartridge-based games back in the day.

Vulture capitalism also played a HUGE role in Toys ‘R Us’s demise, though that’s a much bigger discussion for another column.

At the end of the day, it’s just sad to watch a beloved childhood favorite go the way of the dinosaur – a place where I’ve literally purchased toy dinosaurs for my kids in the last couple of years – because at this point in time, I sincerely don’t see an exciting replacement in sight.

Amazon can deliver us anything we want in two days, but they can’t replicate the fun of walking up and down the aisles with my oldest son, playing with all of the toys on the shelves until we find just the right one to bring home.

Or discovering that completely new and amazing toy that you would’ve never thought to even search for, but now know that you can’t possibly live without having it on your shelf…

I have no doubt that my kids are going to grow up completely and unabashedly surrounded by toys, but it’s going to be a little bit harder raising them as Toys ‘R Us kids without having an actual Toys ‘R Us around to take them to for good report cards and random Saturday afternoons when new toys are required.

Thanks for the whimsical childhood and an inspiringly nostalgic adulthood, Geoffrey – I’ll never forget you. 🙂