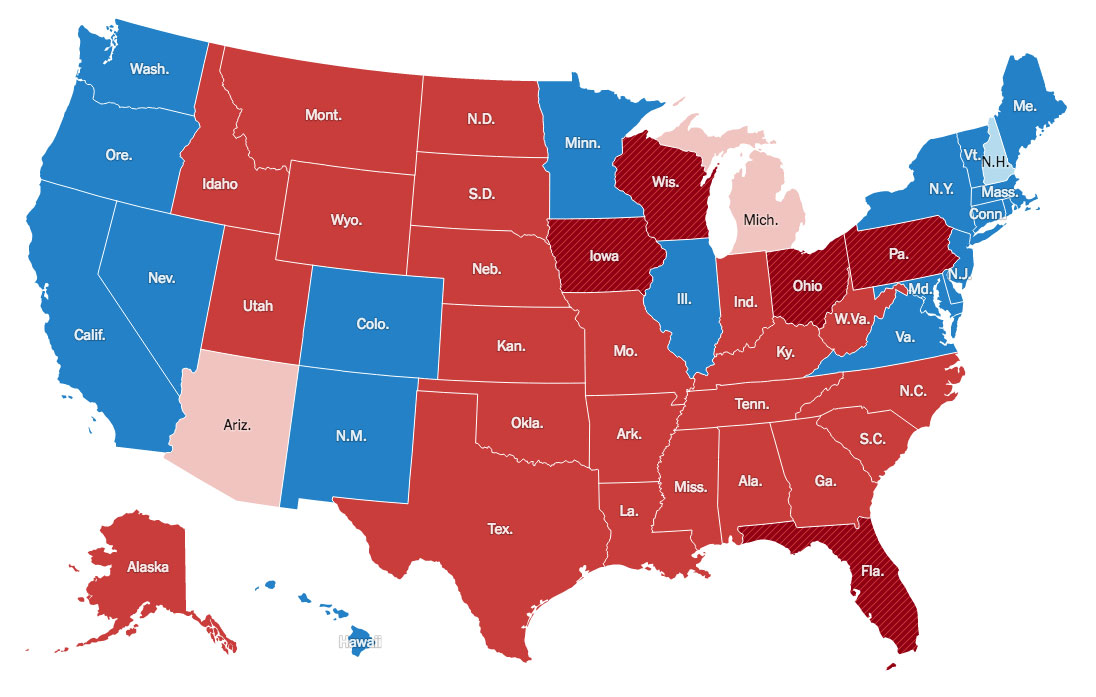 The Day After Election Day

Last night we elected Donald Trump as our 45th President of the United States.

Looking at the popular vote, we were nearly split down the middle with 59 million voters supporting each candidate and about 200,000 votes – roughly the population of Birmingham, Alabama – separating the two. In fact, Hillary actually won the popular vote by those 200,000 votes, however Trump won the electoral vote and thus became our next President-Elect…

But this post isn’t about the merits and flaws of the electoral college vs the popular vote – that’s a discussion which we can have another day.

Instead, this is a post about how we move forward from here because for those of us who didn’t support him, there’s a lot to be nervous or even downright scared about after enduring 16 months of a campaign that regularly featured regressive rhetoric that was the antithesis to so much of our social and civil progress over the last several decades.

Never before had we seen a presidential candidate who actively encouraged such an aggressive front from his supporters, both through threats of physical violence against protestors as well as silencing the press at his rallies, along with a dialog of unpresidential commentary that left so many of the rest of us absolutely baffled as to how he managed to bolster the support that he did…

And of course, no one can forget the less-than-eloquent chanting from rally supporters – “Trump that bitch!” or even “Hang that bitch…”

Now not every one of the 59 million people who voted for Donald Trump is a racist or sexist bigot who thinks that America would be better off without all of the diversity and social justice that represents millions of its citizens today in 2016. Some are, but this is nothing new – we’ve been fighting to change the minds and the hearts of these people over deeply personal issues for generations already.

Others voted for Trump for many of the same reasons that we voted for Hillary – concerns about our economy and an increasingly challenging job market with stagnating wages and limited mobility, fears about national security and ISIS as terrorist cells make our proven methods of fighting war obsolete, a yearning for simpler times in our past when everything seemed to just work without all of the problems that our nation faces today.

The challenge that Trump supporters will face in the next several years is that after finally getting their coveted anti-politician elected to office, now he has to actually deliver on the numerous – and often times outlandish – campaign promises that he’s made … and with Republicans having full control of the House, the Senate, and the Presidency itself, there’s really no excuse for him not to deliver.

If President Trump really is able to Make America Great Again by improving our economy, and bringing back jobs, and building up our dilapidated infrastructure, and driving down terrorism globally, then that’s good for all of us – not only those who voted for him.

That said, the challenge for the rest of us is whether he’ll be able to do some or any of these things without eroding the civil liberties and efforts that have been made particularly in the last eight years by President Obama’s administration, especially when things like repealing the Affordable Care Act and harboring a dangerous disbelief in climate change were major selling points that he boasted throughout his campaign.

Because it’s not good enough to bring back jobs or stomp out terrorism, but also make America a less safe place for people of differing faiths and skin colors and sexual orientations to live.

One half of the American people shouldn’t have to sacrifice the things that they’ve fought for in order to appease the priorities of the other half, however we’ve seen this tug-of-war play out in our politics far too often lately so to expect anything less during Donald Trump’s presidency is probably wishful thinking at best.

In the meantime we will persevere because we have to, and more than anything we need to continue to stand up and fight against intolerance and bigotry and inequality – just as we did before Election Day – not with arms and violence like many Trump supporters threatened revolt if he had lost, but instead with our passion and our insight and our education and our empathy because we know that things like LGBT rights and the fair treatment of minorities and access to healthcare and higher education and social services are all causes that are worth fighting for…

We can’t let the hatred and the negativity from Trump’s most fanatical of supporters cloud the reminder that while 59 million Americans did vote to see our democracy turn in another direction, another 59 million of us still voted in support of the values that Hillary Clinton ran on during her own campaign and those values weren’t simply tossed to the wayside when she lost last night.

In fact, we as individuals were passionate about our own causes long before our politicians got on board, and so it will continue to be our responsibility to tell our elected officials what issues are important to us – regardless of whether they’re a Republican or a Democrat – because at the end of the day their job is to represent all of us, not only the ones who voted for them.